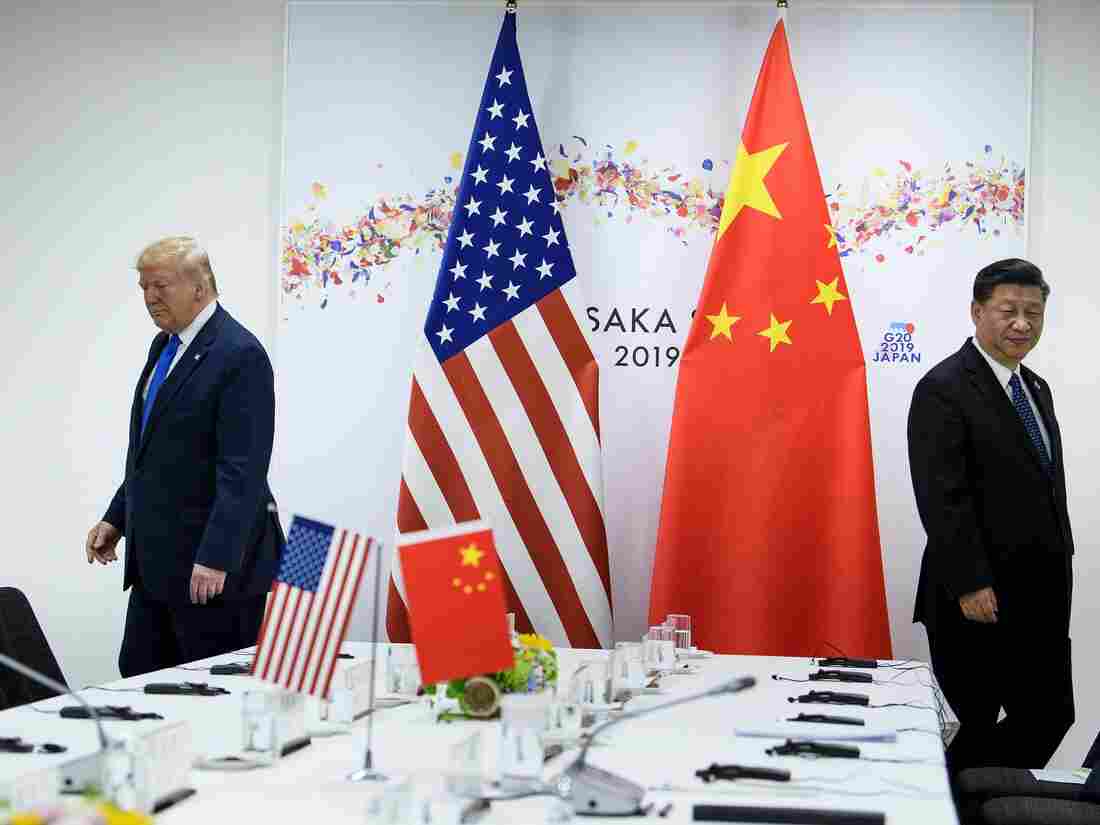 President Trump and Chinese President Xi Jinping attend a bilateral meeting on the sidelines of the G20 Summit in Osaka last June. The two leaders spoke by phone earlier this month. Since the coronavirus outbreak, China has let in some experts from the World Health Organization but has not yet allowed in a team from the U.S. Centers for Disease Control and Prevention. Brendan Smialowski/AFP via Getty Images hide caption

As of Friday, China had reported more than 55,500 confirmed cases of coronavirus and more than 1,300 deaths from the virus. In countries around the world, there are now at least 366 cases, including 15 confirmed in the U.S.

Given the sheer scale of the coronavirus outbreak, this should be a time when governments share data and coordinate a response for what could very well turn into a pandemic. But for two key players, the U.S. and China, cooperation has proved elusive so far.

“Right now, the U.S.-China relationship is suffering from a deep deficit of trust,” says Evan Medeiros, who served in the Obama administration as chief adviser for Asia on the National Security Council. He says a certain level of distrust has always been a part of the U.S.-China relationship, but a bruising trade war and significant strategic differences have exacerbated the bad blood between the two countries.

Medeiros, now a professor of Asian studies at Georgetown University’s School of Foreign Service, says even if the relationship is becoming more competitive, the COVID-19 outbreak illustrates the need for Beijing and Washington to work together.

“As China becomes a global power, the U.S. and China are going to need to cooperate on big global issues like climate change, pandemics, global economic growth,” he says.

Medeiros says there has been cooperation among U.S. and Chinese scientists. That includes modeling where the virus is going to spread, and analyzing medical cases of some of the victims. The sharing of information between Chinese and American professional peers would have required Beijing’s blessing, he notes.

Although Beijing has let some experts in from the World Health Organization, it has not yet allowed in a team from the U.S. Centers for Disease Control and Prevention. “We’re disappointed that we haven’t been invited in,” White House economic advisor Larry Kudlow said this week.

But a Chinese foreign ministry spokesperson said Friday that “China has been active and open towards cooperation with the U.S.”

China has accepted guidance from some experts who are not employed by the U.S. government. Dr. Ian Lipkin, an epidemiologist at Columbia University who is advising authorities in China on the coronavirus, says the Chinese are very interested in bringing in experts who can complement what they’re trying to do.

“But you have to come in as a partner, can’t come in as a colonialist,” says Lipkin, an infectious disease expert. “And if there’s any sort of sense that that’s where it’s going, there’s pushback.”

The U.S. has also taken a hard stand in dealing with the coronavirus outbreak. Late last month, Commerce Secretary Wilbur Ross told Fox Business News the crisis could help create jobs in the U.S., if companies have to move from China.

“I think it will help to accelerate the return of jobs to North America,” he said.

Asked Thursday by NPR about whether strains in U.S.-China relations were making it more difficult to cooperate, Chinese Ambassador to the U.S. Cui Tiankai said: “I think clearly there is a need for the two countries to cooperate because this is a challenge to the entire international community. So in the phone call between President Trump and President Xi, they agreed that our two countries should really work closely together to combat this virus. And we appreciate very much the support assistance given to us by American people, American business… But, but, there’s a big but. For some politician here in this country, maybe for some people in the media, I’m sorry to say that, they are not being so helpful.”

The State Department has issued its highest travel alert to China, warning U.S. citizens not to travel there, and introduced a two-week quarantine for any U.S. citizens arriving from China’s Hubei province. The U.S. also announced it would deny entry to foreign nationals who had been in China in the past two weeks.

Chinese foreign ministry spokesperson Hua Chunying has lashed out at the Trump administration, accusing it of spreading fear and panic. But Derek Scissors, an economist at the American Enterprise Institute, says other countries have also introduced travel restrictions.

National Security Advisor Robert O’Brien has defended the administration’s decision to place restrictions on anyone who may be carrying the virus.

“We felt that was an important measure to take, to safeguard the interests, to safeguard the health of the American people,” O’Brien said during a talk this week at the Atlantic Council. “And I think that’s been borne out. But having said that, this is a tough situation.”

O’Brien said epidemics can spread very quickly, and indicated there isn’t enough known about the scope of COVID-19 or the measures China is taking to contain it.

“We’re monitoring it extraordinarily closely because there’s so little known or made public,” he said.

Scott Kennedy, a China specialist at the Center for Strategic and International Studies, says says the economies of the two countries are so intertwined that the U.S. is justified pushing Beijing for more information, though Beijing historically wants to control the message.

“In this circumstance, the U.S. needs a lot more transparency from China,” he says. “We need that to be built in so that if we’re going to continue to allow people to travel back and forth and do business with each other, we don’t have a constant fear about the health consequences of that.”